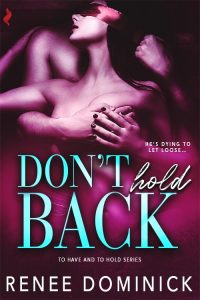 This is going to be it, Jenna thought as the chauffeur started up the limousine. Her Grade-A prime opportunity to convince her best friend’s smokin’ hot brother, Rob, to finally hook up. Finish the night he and Jenna had started all those years ago.

Eight years ago, to be exact. It was a long damn time to wait for the down and dirty, but it’s what she got when the object of her lust was too upright, too stubborn, to admit that the sexual tension between them needed some serious relieving.

Jenna’s best friend, Chloe, had invited her entire wedding party to a weekend getaway at a luxury dude ranch, and Jenna sat facing backward in the limo, which was how she saw Rob bolt through the automatic door outside baggage claim and come to a skidding halt, scraping his thick, blond hair off his forehead with an annoyed gesture as the SUV pulled away from the curb.

Talia, the only other bridesmaid Jenna knew well, elbowed her in the ribs. “Damn, should we tell the driver to stop to let Rob in?”

“No.” Jenna may have been sending him all the go signals since that oh-so-close night, but Rob had himself

convinced she was a villain from the dark side, come to corrupt the Lindgrens like a suburban she-devil. He’d even told her so once. To her face. “The other limo hasn’t left yet. He’ll be fine, and you have all weekend to drool over him.”

Still, being stuck in a car with him for two hours might be too much torture. “He just would have scowled at everyone the whole way,” Jenna said.

Talia leaned forward for the last view of him as they accelerated away from the airport’s pick-up zone. “But it’s such a hot scowl.”

That was true, too. As much time as she’d spent at the Lindgrens’ house in high school, and later, during college breaks, Jenna had been subjected to it hundreds of times. Maybe thousands. She could see it now: straight blond brows clenching together, two vertical lines etched deep atop his nose, his Nordic-blue eyes swirling with annoyance. That scowl had showed up in her dreams plenty of times, but it was his lips that had been her kryptonite from day one. Full, sharply outlined, and begging to be drawn over with a tongue. Her tongue.

Getting her mouth and hands on him would have been worth every bit of the angsty aftermath, if only it hadn’t left her wanting more, more, more.

No, Rob’s scowl had never put her off. She still wanted her do-over, to fuck the man into exhaustion, do all kinds of dirty, wonderful things with him until he was completely unraveled, lying at her feet, limp and tangled as a pile of overcooked spaghetti.

She stifled a groan because the odds of it actually happening were not good. If there was one thing Jenna could claim to be, it was practical. She knew better than to count on the impossible, and if someone told her to describe Rob Lindgren in one word, impossible would be it. In every way. Impossibly hot, impossibly repressed, impossibly untouchable.

He struggled upright and scrubbed his fingers through his hair, trying to jog his brain awake, along with his body. He hadn’t taken many vacations in the last four years, not on his assistant professor’s salary, and certainly not the weekend before finals. This was a special weekend for Chloe—he wouldn’t have missed it for anything—but attending meant he’d had a late night getting his tests ready in advance, and an early morning flight from Salt Lake City. It only took five minutes of road-drone to knock him out.

Despite the small hassles, this getaway had come at just the right time. Rob was holding on to a secret, one he hadn’t mentioned to anyone in his family yet: he was about to be offered tenure. He had some significant life choices to consider, not the least of which would be relocating permanently to the Southwest.

The law school dean was a sixty-something, repressively conservative woman who didn’t much care that her one condition—that he would have to “set down roots and marry the right girl”—would not pass a legal challenge. It was an unwritten job requirement while she was in charge, and everyone knew it.

He didn’t mind the settling down part. It was the dean’s idea of the “right” girl that made him uneasy. He’d been dating those women for the last four years, and they left him…uninspired.

If only he hadn’t been exposed, in the most mindfucking way possible, to the kind of woman the dean would consider “wrong.” The kind that might show up to the staff holiday party in a prom dress and thrift store motorcycle boots. The kind that wouldn’t be meek and passive but who could seize control of his body with a kiss and a hand on his junk and a whispered, “Fuck me, Rob.”

The kind he was about to come face-to-face with at the top of this hill. The thought alone made his cock twitch.

The limo climbed a long driveway bordered by white fencing, and Rob took in the full scope of the ranch. Living and working at a place like this had been his dream, one he’d reluctantly abandoned when he got into law school. It had seemed like a common-sense decision. Now, looking out the window, he couldn’t remember why common sense had won out over passion, except that with him it seemed to be a pattern. He let out a low whistle as they passed half a dozen beautiful Andalusian horses grazing and lazing in the sunny pasture.

There’d been a Lindgren family vacation here once, years ago, but Rob’s summer employment as a tutor meant he’d had to miss it. The limo rounded a bend in the road, and a magnificent barn came into view, with Appaloosas and Paints, no less fine-looking in their own way than the showy Andalusians, standing around in nearby paddocks. “There’s telling me,” Rob said, “and there’s seeing it for myself. Did you check with—what’s his name, again?” Natalie had never confided the details of her past relationship with the ranch’s owner to him, only that there had been one. A significant one.

“Javier, and yes, I spoke to him. He knows you’ll be skulking around the barns.”

They rolled to a stop below a two-story log guest lodge. The driver opened the door and Rob stepped out, breathing in a deep draught of air so heavy with pine resin, it almost felt sticky. He wanted to head right to the barns, but he had to wait for Chloe to arrive. He hadn’t seen his sister since the holidays. The least he could do was say hello to her first.

A burst of laughter from the group standing by the other limo drew his attention, and all thoughts of the barn and Chloe ceased. There she was, his template for the “wrong” woman, only today she wasn’t wearing a prom dress and boots, or a graphic T-shirt and low-top Chucks. Or barely there pajamas. Today she  looked…practically practical.

“She’s changed, hasn’t she,” Natalie said, tapping him beneath the chin.

Rob firmed his jaw. “No.” Yes. God, yes. She’d cut her long, unruly hair into a dark, sleek style that barely brushed her shoulders, for one thing, and she was wearing a blouse fitted enough to show off her enticing shape. His fingers curled. He’d made himself familiar with that shape once. Only once.

“Thus, the drool,” Natalie muttered, her eyes on her phone. “Give in, Rob. Stop being so bullheaded.”

He glared at his sister sidelong. “I have no idea what you’re talking about.”

“Your particular forms of self-denial are…ridiculous.”

He glanced over at the crowd again. Fine, Jenna looked different, on the surface. But he’d bet a future slightly-larger-but-still-cramped office she was the same underneath. Fearless when she should be cautious, playful when she should be serious, and passionate when cool calculation would serve better. And her cowboy boots were pink.

A cloud of dust announced the arrival of Chloe and Dave’s limo. When they emerged from the vehicle—dancing and groping each other—the bridesmaids engulfed them in a shrieking knot. All but Jenna. She stood apart, frowning down at her phone.

There was one thing he could admire about her. For all her brashness, she didn’t scream her excitement. She saved whispers for that.

Shit. Rob stepped to the rear of his limo to grab his bag and his Stetson, in case he needed a shield. He had to give Chloe a kiss hello, then he would haul his ass to the barns and contemplate his future alone. Away from people, and far away from bad influences like Jenna McCaffrey.

“Rob! You made it!” Chloe barreled into him and threw her arms around his neck. “You hadn’t arrived when Dave and I left the airport.”

He picked her off her feet. “Of course I made it, goof. Wow, this place is unbelievable.”

“I knew you’d love it. But I forbid you from spending the entire two-and-a-half days in the barns.”

Rob gave her an exaggerated frown. “First you forbade me from missing the trip, now this? When did you get so bossy?” He leaned past Chloe to shake Dave’s hand. His soon-to-be brother-in-law was both a good guy and gainfully employed, the complete opposite of Chloe’s long list of discarded boyfriends. Rob heartily approved of him.

“Har har. I’ve always been bossy. You just ignored me. Did you say hi to Jenna?”

Frowning for real this time, he turned to face his nemesis. “Hello, Jenna.”

She always said his name in a way that drew out the O just past normal. Mostly as a sneer, but on occasion it had been…spine-tingling. Dick-hardening. The kind of sound that sped down his spinal cord, tightened his balls, and altered everything he thought he knew about himself.

Jenna stood there watching him with her lips quirked to one side, as if she knew exactly where his mind had gone. Rob fixed her with the expression he’d perfected to discourage first-year students from asking him questions they could answer by reading the syllabus. Neutral, with a trace of intimidating. “How are you?”

Unfortunately, Jenna wasn’t one of his first-years. Her grade didn’t depend on his goodwill. “You brought your cowboy hat. How cute.”

“And you wore pink boots. How cliché.”

“Oh, knock it off, you two,” Chloe said. “This is supposed to be a fun weekend. I’m not having you at each other’s throats the whole time.”

Rob straightened, unnerved by the receding sensation of the world having zoomed to close-up, just him and Jenna in the bright center of a black void, as if the dozen people surrounding them didn’t exist at all.

That was…not good. Natalie wasn’t entirely wrong about him denying himself certain pleasures. He’d shoved carnal Jenna-thoughts deep into the cupboards of his mind more than once, but even from there, she had the ability to prey on him.

“And you,” he said, risking Chloe’s wrath. “Predictability is important.”

When Chloe opened her mouth, he cut her off, annoyed at himself for rising to Jenna’s bait. “I’ll see you on the boat at four,” he told his sister. “I’m going to the barns.”

“Three forty-five, Rob. I mean it. Do not be late.” Chloe poked his arm with every word.

“Yes, Mom.” He walked off, but after a few steps, he remembered he wasn’t dressed for mucking around the stables. So instead, he redirected to the lodge and altered his plan. Once he got himself checked in, he would track down Jenna for a quick word, then go to the barn. If the two of them couldn’t agree on some basic civility going forward, it was going to be a brutal weekend.