**CONTEST CLOSED. THANKS EVERYONE!**

The folks at Entangled Publishing hooked me up with Nina, and I don’t know if they’re just that good, or if it was serendipity, but the connection is almost too perfect to be accidental. Nina lives in the mountains of Andalusia in Spain, the same warm, sumptuous region from which Javier—one of the sexy heroes of my upcoming release HOLD ME HARDER—originates.

Nina has generously offered my website visitors a chance to win a copy of her upcoming release THE BAD GIRL AND THE BABY, and I’m matching her with a copy of HOLD ME HARDER. Two scorching-hot books to the winner, just in time for those cold December nights. 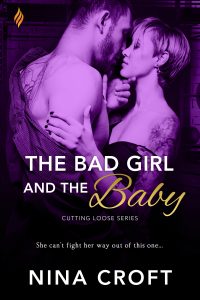 THE BAD GIRL AND THE BABY, the third installment of Nina’s CUTTING LOOSE series will be released on December 4. While it’s part of a series, it can be read as a standalone, no problem. You can pre-order in all the usual places: AmazonUS | AmazonUK | itunes | BN | Kobo

Captain Matt Peterson prides himself on being able to handle anything…until he winds up as the guardian of his baby niece, Lulu. Two years and six nannies later, his well-ordered existence is in chaos. Still, he’s all Lulu has. Except, well…there is an aunt…

Darcy Butler has spent the last three years in prison for beating up her abusive brother-in-law. Her only regret is that she didn’t hurt him worse and stop him from killing her sister in a drunken car crash six months later. But now, Darcy just wants to rebuild her life. Starting with finding her sister’s child.

But Matt doesn’t want an ex-con with a record for violence anywhere near Lulu. Unfortunately, he can’t seem to keep away from Darcy, himself. Despite their differences, their chemistry is combustible…and the sex is incredible! Still, it can’t possibly last. Can it?

I had a few questions for Nina…

RD: You make wine from your own grapes. How cool is that! What about Darcy? What’s her drink of choice her first day out of prison?

NC: First day out of prison, Darcy met Summer for lunch at the Ritz, and they drank champagne. Other times, Darcy likes a beer or a glass of red wine, but probably her favorite drink is a chocolate martini – you’ll catch her downing a few in the Bad Girl and the Baby.

RD: If Lulu was going to choose a pet from your large menagerie, who would it be?

NC: Lulu is obsessed with puppies, so maybe one of the dogs (I have four)—probably Fred as he’s the cutest. But there is a good chance she’d go for Piggles, my three-legged Vietnamese pot-bellied house pig. Children seem to find her fascinating – maybe because she can’t run away!

RD: You’ve traveled a lot. Do you have places left you’d like to see?

NC: I live on an almond farm in the mountains of southern Spain between the Sierra Nevada and the Mediterranean. I share it with my husband and a whole lot of animals. We’ve been happy to stay put for a good few years, but we’re just now developing a serious case of wanderlust. We really want to go on a three-month trip to Vietnam, which looks a fascinating country. But first we need to find someone to look after the place and all the animals. Any takers?

NC: Definitely Spanish tapas. Granada is our nearest city and there are some fabulous tapas bars and restaurants. If you do it right, you don’t need to buy a meal, just lots of beer or wine, and the food comes free. Some of my favorites are tortilla Española, patatas bravas, gambas alioli.

RD: What’s next? Is there another Bad Girl in the works or do you have something else in store next?

NC: Darcy from The Bad Girl and the Baby, was the last of the bad girls, but I have a few things happening in 2018. Coming up next, in February, is a paranormal romance, Release Me, book 3 in my Storm Lords series.

Mmmm, tapas! I might have to give a thought to pet-sitting in Andalusia.

Leave me a comment if you’d like to enter for the chance to win the books—and, if you feel like it, tell me, if you could only choose one, would it be full breakfast or tapas? I’ll draw the winner from the comment section on November 25th.

In the meantime, be sure to visit Nina’s website ninacroft.com to see the other books in the CUTTING LOOSE series, along with all of her other books.

As they say in Spanish, ¡espero veros pronto! I hope to see you soon!